Have you ever caught yourself thinking the worst of a situation? Or how about convincing yourself of things that ultimately make you feel just awful and probably aren’t even true?

A dear friend of mine called me today in a calm panic. She hadn’t heard from her partner in over 24 hours and feared the worst. They never missed a day without communicating either via email or text so, when she hadn’t heard from him, she assumed he’d been badly hurt or was perhaps even dead.

I suggested that there must be another explanation, that perhaps his cell phone battery had died and he was stuck somewhere with a work or family emergency.

She wasn’t sure. She hoped that she would feel it if something bad were to have happened, that she might have that sort of “knowing”, but all she could do was think the worst.

As we chatted a little bit more about it, I heard a beep in the background on her end, a text message from her partner. He was fine. In fact, he had sent her a message just yesterday, one that had not made it through.

In Michael A. Singer’s book entitled, The Untethered Soul – A Journey Beyond Yourself, he spends a whole chapter on what he refers to as our “Inner Roommate”: that voice inside the mind that just won’t shut up, the psyche.

He suggests paying attention to it the next time you have a shower, to see just how much commotion that voice is causing. Are you really peacefully soaping your body or washing your hair or is there a constant stream of chatter – one that hops from one random topic to the next – going on inside your head?

“I’d better not forget to pick up my dry cleaning today. I wonder how so and so is doing? That movie last night was so good.”

He then suggests that you externally personify this inner roommate, paying attention to it while watching TV for example, imagining it is sitting on the couch beside you:

“Did you turn off the light downstairs? You better go check. Not now. I’ll do it later. I want to finish watching the show. No. Do it now. That’s why the electric bill is so high.”

Seriously. Any more of this neurotic behaviour and you’d be telling that roommate to shut the fuck up or be kicking him out completely.

A few months ago I began to notice my inner roommate a bit more. I was meeting with a talented writer and performer with the intention of working with him to better my own writing and get it ready for performance. I really wanted to get to the next stage of my work and just wasn’t sure what my next steps should be.

With this in mind, I found myself somewhat inspired by my interactions with this person but also slightly disheartened by it. One day, on my way home from one of our meetings, I found myself in tears. So, I began to listen to my inner monologue, which went something like this:

“What are you doing? Who do you think you are? You’re nothing like these successful people you surround yourself with. THEY’RE actually DOING something. What are YOU doing? WHAT is your problem? You suck.”

Is it any wonder I got upset?

Okay. So, if you were sitting next to your roommate or your best friend and they started talking to you like this, what would YOU do?

It suddenly dawned on me that I didn’t have to take this shit anymore.

It’s funny because I still have trouble deciding whether this new awareness I have of my own inner roommate makes me crazy or sane. I mean, I catch myself sometimes having an inner dialogue with myself in an attempt to get the madness to stop, which in itself could be considered a bit mad I suppose.

In fact, I wrote a poem many years ago called “Madness” (below), which touches on this very topic of the mind and the mayhem it causes if we let it. Reading this poem again now brings about another “aha” moment of a message for myself that is now finally being revealed through my own writing.

I think I’m starting to get it now.

I told a friend the other day that my Ego-mind is very strong and not always positive, which creates all sorts of fear and trepidation as I work to break free from my comfort zone again and take steps towards the unknown. In fact, my very first blog post, entitled “Hello Ego”, touched on the fear I felt my negative Ego-mind was creating.

My friend today was terrified that her partner had died because her mind led her to believe that something awful had happened because of one missed text message. And, in actuality, this could have been the case. But why let the mind, that inner roommate, make that decision for you only to reprimand you for being so silly when everything turns out just fine or say “I told you so” when it all goes to shit.

Listen up and listen in and then tell that inner roommate that you’re just not going to listen to him anymore. 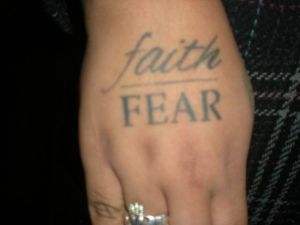 a poem by pippa