Talking to “God” on the Big White Telephone

When I was growing up, we had a picture of a poem hanging up in our bathroom near the toilet. It was called “A Smile” and the author was unknown. My mother had bought this picture while pregnant with me. It was hanging in a shop window near the hospital and she would see it each time she went for a check up.

She told me that while she was pregnant with me, people would always comment on her smile and that it was these comments, and the fact that she kept seeing this poem, that led her to buy it one day.

During the many parties my sister and I would throw during high school, people spent a fair amount of time in our bathroom, and not just to use the toilet. Sometimes it was to get away from the crowd for a quick powwow and some girl talk, sometimes to make out with a boyfriend or a girlfriend, and sometimes it was to “talk to ‘God’ on the big white telephone”.

Whatever the reason, our friends started to become more familiar with the poem; so much so that it was actually quoted in write ups in the high school yearbook.

After my sister and I moved out, my mother made copies of it for us, perfect replicas of the original document on yellow parchment paper, each nicely framed.

Today, while I was out for my walk, I smiled at a man jogging past me and he smiled back. Then a girl on a bicycle smiled at me and I smiled back. Yesterday, a woman I had once chatted with waved to me and smiled from across the park. In fact, I share and exchange smiles with numerous people when I am out and about. It just feels good, even if they don’t smile back.

And it always makes me think of a special poem hanging on a bathroom wall, and a few of those conversations I once had on that “big white telephone”.

A smile costs nothing, but gives much. ☺It enriches those who receive, without making poorer those who give. ☺It takes but a moment, but the memory of it sometimes lasts forever. ☺None is so rich or mighty that he can get along without it, and none is so poor that he can be made rich by it.☺ A smile creates happiness in the home, fosters good will in business, and is the countersign of friendship.☺ It brings rest to the weary, cheer to the discouraged, sunshine to the sad, and is nature’s best antidote for trouble. ☺Yet it cannot be bought, begged, borrowed, or stolen, for it is something that is of no value to anyone until it is given away. ☺Some people are too tired to give you a smile ☺ Give them one of yours, as none needs a smile so much as he who has no more to give. 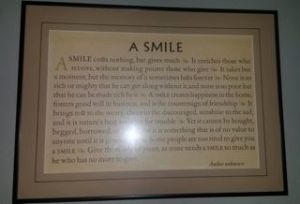